by Nancy McCammon-Hansen
At the risk of sounding like an ultimate history geek, I’m going to encourage you to read more history in 2014. There are a number of books out now about facets of history that most of us never learned in school, and two works that I have read this fall have references to Indiana.

“The Great Dissent: How Oliver Wendell Holmes Changed His Mind—and Changed the History of Free Speech in America” by Thomas Healy has a lot to say, particularly if you’ve been following the “Duck Dynasty” flap in the media. What we take for granted—you can say just about anything you want as long as it doesn’t endanger others and you’re willing to suffer the consequences—wasn’t always so.

A document in our archives entitled “When Teddy Came to Town” by Ben Meek tells of Roosevelt’s visit. William Jennings Bryan, Democratic candidate for president, had visited the city on September 10, and Debs, the Socialist candidate, on October 3, speaking at the Princess Rink on the southeast corner of West Main and Fulton. The building was a skating rink that was also utilized for public meetings.
“The young and super-energetic Republican Vice-presidential Candidate and Governor of New York State, Theodore Roosevelt, arranged a swing through the pivotal state of Indiana by train on October tenth, eleventh and twelfth, 1900. Beginning at Hammond, he proceded (sic) to Lafayette by train and then on to Frankfort, Logansport, Peru, Wabash, Huntington and ending with an evening speech and rally at Fort Wayne.
“ “The “Fort Wayne News”, the local Republican organ, devoted much copy to the plans for Roosevelt’s visit. According to the “News”, the Rough Rider Clubs with an enrollment of over one thousand men, were organized in Allen County and several local stores advertised Rough Rider Uniforms for sale. To generate interest and excitement in the visit of the ‘Hero of San Juan Hill’, a flag pole raising was held on Spy Run Avenue on October fifth. Several speeches were delivered, including some in German.
“On the great day, there were two parades, one in the afternoon and a larger one in the evening which started at the Barr Street Market and continued down Main Street to the Rink. The marchers included first, the mounted Rough Riders followed by their dismounted brothers, all of whom were in uniform. The Tippecanoe Club members, dressed in plug hats and uniforms, the older men in carriages, formed the Fremont and Lincoln Voters Section. There were the McKinley and Roosevelt Junior Clubs, members of which were boys and girls. The large German population was represented by the German Republican Club and was followed by the Colored Republicans and the Railroad Men’s Republican Club. There were two bands. Most of the marchers wore uniforms and probably carried kerosene torches, making a colorful procession.
“Roosevelt’s train was an hour and a half late so he arrived somewhat fatigued. However the overflow crowd at the Princess Rink invigorated him. The “Fort Wayne Journal” described his appearance, ‘Teddy lost no time in mounting a chair where he could be seen from every part of the hall. He stood for a moment with his shoulders braced back and his chest out, the cynosure of all eyes. Then he opened his lips and grinned and his white gleaming teeth could be seen from every part of the room. The crowd went wild.’”
Bryan and his running mate, Adlai Stevenson, carried Allen County by 10,601 votes to McKinley/Roosevelt’s 8,172. But the state as a whole was won by McKinley, who would die from an assassin’s bullet in the fall of 1901, making Roosevelt the youngest president in US history.
In addition to the works referenced in this blog post, other sources include

Posted by Nancy McCammon-Hansen at 11:20 AM No comments:

Why is HE so important?

It’s the holidays and you’re sitting around trying to think of ways to impress visiting relatives with how knowledgeable you are about your town, or you’re bored and don’t want to go outside because of the cold. If you’re like me, you probably start to wonder why a place got called by that name. So, here is a cheat sheet of some of the most recognizable names around town. Have fun amazing your friends and neighbors with how smart you are!

Art Smith- Daredevil Pilot was known as “The Birdboy of Fort Wayne”. Artifacts relating to Art are on display at the History Center. http://historycenterfw.blogspot.com/2011/02/flying-high-in-fort-wayne.html 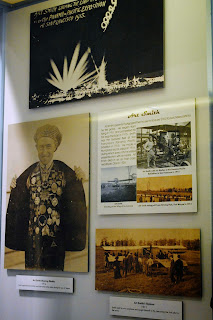 Barr, John- merchant who bought the first tract of land in Fort Wayne. Tract is now the center of downtown. See the blog post http://historycenterfw.blogspot.com/2013/09/barr-street-market-trading-under-trees.html 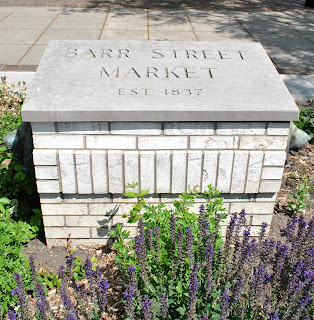 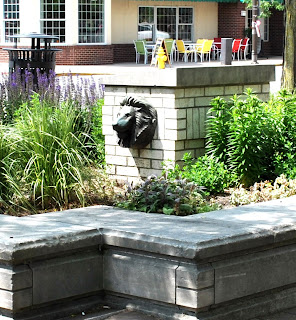 Bishop Luers- first bishop of Fort Wayne diocese. Helped to build the Cathedral of the Immaculate Conception.  Buried in Cathedral.

Cass, Lewis. Senator. Remembered in Fort Wayne for falling off a gangplank and into the canal.

Foster, - manufacturer.  Helped to establish Foster Park. Portrait is on Grand Staircase at the History Center.

Francis Slocum- Kidnapped by Indians at age 5. When found decades later by birth family, she was so thoroughly Indian that she no longer spoke English. She refused to go back to her birth family.

Hanna- Samuel Hanna. Businessman; One of 1st associate judges for Allen County; bought lots of land, extending into Wabash. He was one of the leaders in building Wabash-Erie Canal. Hanna’s family portrait is in our digital collection. For more info, visit the History Center blog http://historycenterfw.blogspot.com/2013/07/samuel-hanna-founder-of-fort-wayne.html

Harrison, William Henry- war hero, won the Battle of Tippecanoe, ran for President with John Tyler- “Tippecanoe and Tyler Too!” Known for being the President with the shortest term in office, dying after only month, due to pneumonia. (He made a long inauguration speech, in the middle of winter, without an overcoat) see History Center blog http://historycenterfw.blogspot.com/2012/02/short-presidency-but-lasting-impact-on.html

Johnny Appleseed- Real name was John Chapman. He is buried in Fort Wayne, at Johnny Appleseed Park. The History Center has on display a flask that belonged to him. The gift shop has the “Chapman Documents” which are replicas of a deed signed by Johnny, as well as a 2003 Old Fort News on Johnny Appleseed.

Lincoln- Abraham Lincoln, the 16th President. Lincoln Tower and Lincoln Highway are named in his honor, although he never won the Allen County vote.

Little Turtle- leader (war chief) of Miami. Sword is on display in History Center. He won the Battle of Kekionga in 1791, one of the worst defeats of the U.S. Army by Native Americans. Recognizing that it would be better for the Native Americans to try and live peacefully with whites, signed Treaty of Greenville. Daughter Sweet Breeze married William Wells. Statue stands in Headwaters Park. For more info, the gift shop has a pamphlet on Little Turtle, called “Little Turtle: The Man and his Land”. Or you can visit the History Center blog http://historycenterfw.blogspot.com/2013/06/meshekinnoquah-little-turtle.html There are also several blog entries from July 2012 on Little Turtle, quoting back issues of the Old Fort News 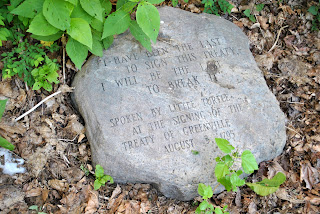 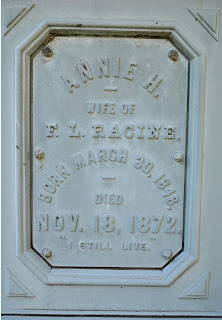 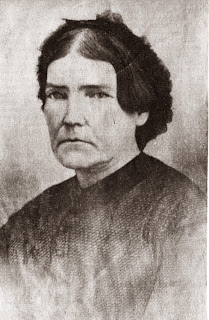 Richardville, Chief Jean Baptiste de Richardville. His father was a French fur trader, and his mother was the sister of Little Turtle. Wealthiest Native American in the U.S at the time of his death.  Indian name was Pechewa (wildcat). Business and industry came from mother. Civil Chief of Miami. See History Center website for more information.
http://historycenterfw.blogspot.com/2013/01/a-brief-overview-of-chief-richardville.html

Rockhill, William- one of the first men to purchase land in Fort Wayne. He later became a state representative.

Rudisill, Henry- prominent in developing what became St. Paul’s Lutheran Church and then in developing Trinity English Lutheran. For many years, he was one of the few people in Fort Wayne who could speak German and English.

Swinney- Thomas Swinney. Swinney Homestead. For more information, you can pick up a copy of Graceful Plutocracy put together by The Settlers.

Tecumseh- Leader of the Shawnee. He was hostile to whites.

Wayne- General Anthony Wayne. Revolutionary War. Worked with George Washington. Won Battle of Fallen Timbers.  Known as “Mad Anthony” because of his bravery. His statue is in Freimann Square. 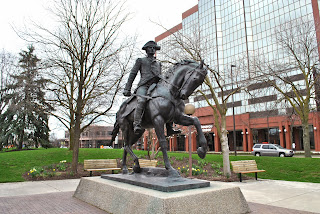 William Wells- He was captured by Native Americans. Little Turtle was his father-in-law. Wells worked with Little Turtle and the Miami, before deciding to join the whites and work with Gen. Wayne. Spy Run is named for him. Wells was killed at Ft. Dearborn in Chicago. For more info, visit the History Center blog http://historycenterfw.blogspot.com/2013/10/william-wells-miami-apekonit.html and
http://historycenterfw.blogspot.com/2010/09/writings-of-william-wells.html 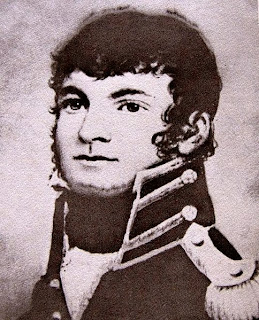 Wolf & Dessauer- THE place to shop for Christmas. Downtown holiday exhibits of Santa in his sleigh and the Wreath are from the old W&D’s. You can also look at the History Center virtual exhibit on the legendary store!

Posted by The History Center at 10:12 AM No comments:


The great expanse of the main post office once formed the central part of a large railroad operation commonly called the Pennsy Shops. These locomotive and railroad car shops extended east nearly three miles along the present-day Conrail tracks on the south side of the city.

For nearly half a century, from the Civil War until just past 1900, Fort Wayne was one of the most important railroad centers in the nation.

What made Fort Wayne a railroad center was the complex of shops where locomotives and cars were designed, built, tested and repaired or overhauled.

Here also labored hundreds of craftsmen who built some of the most luxurious passenger cars in the nation. The shops themselves were the central feature of all this activity.

Even before a train had ever been seen in Fort Wayne, Samuel Hanna in 1852 donated a parcel of land east of Clinton for the anticipated railroad shops. In 1853, John and Charles Cooper set up a blacksmith’s shop nearby, and in the next year Kentuckian Sion Bass bought the operation, only to sell it in 1857 to the newly formed Pittsburgh, Fort Wayne and Chicago Railroad (later the Pennsylvania Railroad).

This was the beginning of the Pennsy Shops. The shops grew rapidly, especially with the demands of the Civil War; in concert with the Bass Foundry located across the street, the railroad ships provided critical material help to the Union war effort.

After the Civil War, railways across the nation expanded greatly, and the demand for better engines and cars redoubled. In Fort Wayne the basic design of the Pullman Car was refined to produce the “Fort Wayne Silver Place Car.” Between 1867 and 1869, seven of these cars were built in Fort Wayne and at a  (then) staggering cost of $18,000 each.

Finally, in 1953 the last of the railroad operations closed, and by 1966 all the property had been abandoned; the roundhouse, the last vestige of the Pennsy Shops, was razed in 1984.

Originally published in Fort Wayne Magazine “Along the Heritage Trail with Tom Castaldi” – March 2007 No 30.

Allen County Historian Tom Castaldi is author of the Wabash & Erie Canal Notebook series; hosts “On the Heritage Trail,” which is broadcast at 6:35 a.m., 8:35 a.m. and 6:30 p.m. Mondays on WBOI, 89.1 FM; and “Historia Nostra” heard on WLYV-1450 AM and WRRO 89.9 FM. Enjoy his previously published columns on the History Center’s blog, “Our Stories,” at history centerfw.blogspot.com.

Posted by The History Center at 1:42 PM No comments: