South Bend on a Saturday

Yesterday, much to my surprise, I had a wonderful day in South Bend and am going to have to return to see what I missed at one of their local museums. If you’ve read some of my other posts, you know I am an advocate for getting to know the area where you live and its history. South Bend IN is a great place for doing that.

After a leisurely breakfast and some reading, I headed off to Notre Dame. This is a good place to walk and take photos of the statues and architecture. Then, of course, you have to visit the bookstore, which has an extensive religion section of course, but a also a fair amount of fiction for adults and children alike, and HISTORY! 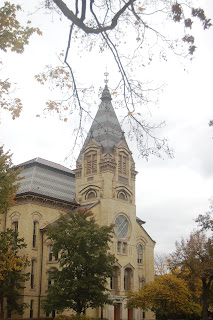 Then it was off to the Center for History and the Studebaker Museum. Unfortunately, I had not planned ahead and found that the Center’s admission price included, if you so choose, a tour of Copshaholm, the mansion that belonged to the Oliver family. The mansion, where I only had time to view the first floor, is stunning. All of the original furnishings are intact and it is as though the family had just stepped out while you toured their home.

The Joseph D. Oliver family moved into the Queen Anne/Romanesque house on New Year’s Day, 1897. The home has 38 rooms, making it smaller than the Studebaker’s home, but its exterior is far more impressive due to the stonework and design. Copshaholm is the name of the town in Scotland where Oliver’s father lived until immigrating to the United States. Oliver made his fortune in farm equipment, developing a process to make plows more sharp and later manufacturing tractors.

If you visit the home, plan to spend at least an hour because the tour is guided and some tourists tend to get a little chatty with the guide. Just a confession—but I was promoting Fort Wayne! 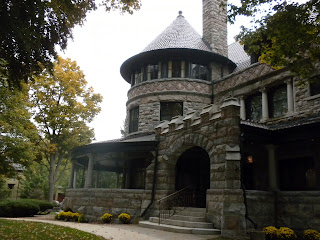 The temporary exhibit at the Center for History is “Gizmos, Corsets and Concoctions”, which, unless you REALLY want to see how a lobotomy is performed and what a too-tight corset does to a woman’s spine, can be skipped. I didn’t have time to walk the “time-line” in the basement nor did I have much interest in the baseball exhibit, but the children’s section looked like a lot of fun if you have a child under six that you’re trying to entice to go to a museum.

There’s also a gallery devoted to Notre Dame and its presidents, which is worth more time than I devoted to it. 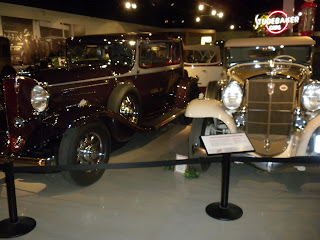 If, like me, you love old cars, the Studebaker portion of the building is something to see. My great-aunt Hazel always drove Studebakers. My father, who worked for over 50 years in the car industry, never could understand why she thought those were the cars for her. Granted, some of them were pretty darn ugly. But others were pretty darn cool and you can see why at this museum. The Studebakers also collected carriages belonging to famous persons, such as Lincoln, Grant, McKinley and Benjamin Harrison, whose carriages are on display.

South Bend also is home to the College Football Hall of Fame, two other art museums, the South Bend Chocolate Factory and Museum, the Military Honor Park and Museum, and the Civil Rights Heritage Center. Next trip, the Civil Rights center will be on my list as well as a return to the Oliver Mansion so I can view the second and third floors.

History CAN and IS fun! Day trips, photography and a curiosity on the part of parents can make learning fun for kids and family memories.

(And as an aside, I got lost and wound up at the city's oldest cemetery. I didn't take time to get out and walk around, but if you like studying history via headstones, this would be a good place to do that.) 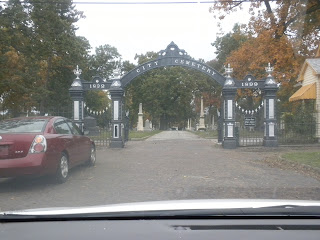 Posted by Nancy McCammon-Hansen at 11:02 AM No comments: