A Daguerreotype of the Fort 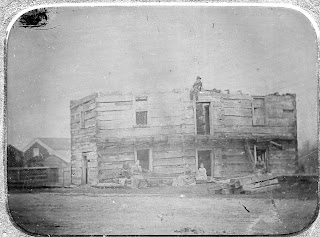 The History Center has a wonderful collection of historical images. Because the society was founded in 1921, it acquired many invaluable artifacts from the children and grandchildren of Fort Wayne's earliest pioneers. Its photographic collection is full of treasures, and one item in particular of special value is a daguerreotype of a blockhouse from the old 1816-era fort, actually one of two daguerreotypes of it in the collection.

In the fall of 1852, Charles C. Stevens stopped by the crumbling building and photographed his friends seated in front. Located on Main Street near the present site of Fire Station No. 1, the old fort had been abandoned by the U. S. Army garrison in 1819. During the ensuing years several families lived in the structures, including, it is said, some Irish immigrants, but the structures soon became derelict. By the 1850s, little of the fort was left. The pallisades were long gone, and scavengers had taken for souvenirs many of the original timbers. Local residents used other pieces apparently as building mateirals and beams in local houses, including the Merchant Huxford house on Spy Run Avenue, which is still standing.

Little is known about Stevens. "Craig's Daguerrian Directory" indicates that he advertised himself as a daguerrian between June and November 1852 in rooms at the residence of John Fairfield on Main Street. In his book, "Pictorial History of Fort Wayne," Bert Griswold quoted Mrs. Adam Link, who owned the daguerreotype in 1917, and cited her account of the picture. Stevens, she said, came from Kennebunkport, Maine, as a guest of Hannah Fairfield, later the wife of O. L. Starkey and the mother of Mrs. Link. On the day the picture was taken, Charley Munson was driving his cow to pasture in the old apple orchard in what is now Lakeside. Several members of the Fairfield family joined Munson for his walk, and together they stopped at the ruins of the old blockhouse, where Stevens took their picture. Seated at the top was John Fairfield, Mrs. Link's uncle. Others from left to right were Charley Munson, Hannah Fairfield, Priscilla Fairfield, Addie Fairfield, and Amanda Henderson. The building was torn down soon after the picture was taken.

The image is one of the oldest outdoor photographs extant for any place in Indiana. One of the treasures of the collection, it is to Griswold's credit that we know so much about it.
Posted by John Beatty at 3:31 PM No comments: