The Extraordinary Portrait of James Hackley 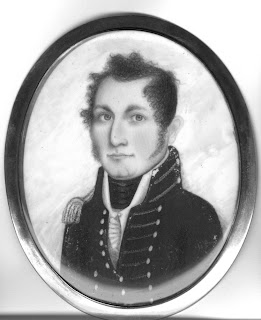 One of the colorful figures of Fort Wayne during the era of the military fort was Capt. James Hackley. Hackley served in the Third Infantry and had been stationed at Fort Dearborn (Chicago), where he became acquainted with Dr. William Turner, who would marry William Wells's daughter, Anne. Turner returned to Fort Wayne where he held several prominent posts, including for a time, Indian Agent.

Anne Wells's sister, Rebecca, became interested in Hackley after a cousin told her to "set your cap for him." Her uncle, Samuel Wells, also thought well of the young captain and recommended the match. The two were wed in April 1817 and moved to Fort Dearborn, where they remained a year until returning to Fort Wayne, when Hackley resigned his army commission.

The Wells daughters were prominent in the early fort community, not only because of the reputation of their father, but because they had inherited a sizable amount of property, including several Indian reservations (inherited through their Miami mother, a relative of Little Turtle). Hackley rose to prominence because of these connection. He became a Mason and held other local offices. For a time the Hackleys and Turners shared Wellsington, the former home of William Wells located near what is now Spy Run Avenue. But problems began to fester when the Wells estate was divided in 1826. Hackley became angry about the inheritance and the portion allotted to Anne Turner (whose husband had died in 1821). In a fit of rage, he tried to murder his sister-in-law while she sat in an upstairs room, but she managed to escape through a window. Despondent, Hackley committed suicide by hanging himself. A large funeral was held afterwards, mostly because his widow, rebecca, was highly respected. The Masons agreed to participate, contrary to their usual discipline.

The portrait of Hackley inthe History Center's collection is painted on ivory and obviously dates before 1818, when Hackley was still an army officer. It remains one of the museum's treasures - a rare artifact with an image from the military era of Fort Wayne's history.
Posted by John Beatty at 2:28 PM No comments:

Farmers Markets in the news--then and now....

Farmer's Markets are in the news this morning--July 20, 2011--and with the Barr Street Market running every Saturday morning until September 10, we thought you'd like to know a little bit about the history of this downtown jewel.

The Barr Street Market, named for John T. Barr, is one of the oldest and best-known features of downtown Fort Wayne. The town of Fort Wayne actually was born on Oct. 23, 1823 when Barr and his partner platted the land they had bought for the city.

Samuel Hanna eventually assumed most of Barr’s Fort Wayne properties and the land for the market was donated in 1837 by Hanna.

James Humphrey and Henry Nierman were awarded the contract in 1855 for a new brick market house. The building was notable for its squat square tower topped by an onion-shaped cupola. In 1892, when Fort Wayne’s first real city hall was erected, the old market house was torn down.

Market Masters were named by the city to operate the market. Among them was Peter Kiser, one of the more interesting characters of mid-19th-century Fort Wayne. Peter Kiser was physically impressive, weighing more than 300 pounds and standing well over six feet tall.

He established the city's first butcher shop in 1832 and came to hold considerable political power, despite the fact that he could neither read nor write.

In 1910, at a cost of $20,000, the outdoor market was given its greatest embellishment -- concrete pavilions joining arches between the City Hall and Washington Boulevard. A pointed double- gothic arch made of iron was erected over Wayne Street, connecting the two market pavilions.

In the first decades of the 20th century, the market saw its best years. City Hall next to the market was the site of city police and ambulance service that operated out of the back doors. The arrival of the full patrol wagon at the police station or the detention of a rowdy always made for an interesting diversion from ordinary market business.

Less appetizingly, the bloodied stretchers of the ambulance service were dutifully scrubbed at the convenient catch basin at the end of the market near the meat and dairy stalls.

The pavilion nearest to City Hall was razed in 1957. In 1958, the Wayne to Washington Street pavilion was destroyed. The market remained idle until 1966, when the Barr Street Market Association was formed to revitalize outdoor trade in downtown.

Admission to the History Center is free when the market is open.
Posted by Nancy McCammon-Hansen at 9:17 AM No comments: