On the third Monday in January we celebrate Martin Luther King's birthday and honor his many contributions to building a better world. As an orator and champion of civil rights and non-violence, Dr. King is most often remembered for his "I Have a Dream" speech delivered during the March on Washington at the end of August 1963. Few of us know that a couple of months earlier on June 5, Martin Luther King spoke here in Fort Wayne at the Scottish Rite. His words touched the hearts of thousands gathered to hear him. Front page publicity in The Journal Gazette made it obvious that this black preacher from the South was someone to be taken seriously.

King was only 34 years old when he visited Fort Wayne, but he had already built a national reputation. For six years he had been leading a coalition of African American ministers known as the Southern Christian Leadership Conference for the purpose of ending widespread racial segregation. Months before his appearance at the Scottish Rite, King had led non-violent boycotts, sit ins, and marches in Birmingham, Alabama. National television cameras had captured the police brutality used against demonstrators, igniting widespread moral outrage. Only recently, Dr. King had written his now famous "Letter from Birmingham Jail" explaining to fellow ministers why the movement for black civil rights could no longer wait.

Dr. King's appearance in Fort Wayne was arranged by a group of church and civic leaders led by the African American Frontiers Club. Dr. John Meister, pastor of First Presbyterian Church, introduced him as "a glorious disturber of people and the peace."

Fortunately for us today, much of Dr. King's speech was recorded by Wesley Bashore, a journalist writing for The Journal Gazette. We can imagine being present in the packed auditorium on that warm evening moved by the passion and immediacy of Dr. King's words.

"There come a time when a people get tired of injustice, oppression, exploitation. We want to be free."

"Segregation is the new form of slavery covered with the niceties of civilizations."

"The Negro today will suffer, sacrifice, even die to be free."

"Some say slow up. You're moving too fast., We can't - we love America too much. We're through with gradualism, tokenism, see-how-far-you've come-ism."

"We have learned to stand up against the evil system - and still not hate in the process. We have discovered that love works miracles."

In an interview with Wesey Bashore, King made it clear that segregation was not only a problem in the South. De facto segregation "in such cities as this [Fort Wayne] can be just as damaging as the prevalent legal segregation of the South," he said.

A year after his visit to Fort Wayne, Dr. King was vaulted to international fame by being awarded the Nobel Peace Prize. Congress under President Lyndon B. Johnson would pass the Civil Rights Act of 1964. Years of struggles to fulfill the promises of a more equal society would long continue. Few would remember Dr. King's speech here at the Scottish Rite, one of thousands he made during his travels across the country before his tragic assasination in 1968. Still, at this time when we celebrate his life, it is appropriate to recall our local connection. As he did in so many communiities, here in Fort Wayne Dr. King kindled hope and ignited a movement for social justice that wouldn't be stopped.

The Journal-Gazette June 5, 1963 article covering Dr. King's visit is available on microfilm at the Allen County Public Library.
by Peggy Seigel
Posted by Peggy Seigel at 11:04 AM 1 comment:

Who Put That There? 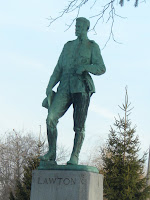 There’s a great little book entitled “Who Put That There” that can serve as a guide for exploring ’s history. The book was written by students at St. Jude Catholic School in 1998 with an Historic Preservation Grant from the Historic Landmarks Foundation of Indiana, the Indiana Humanities Council, and the National Endowment for the Humanities.

“Who Put that There: Outdoor Sculptures of Fort Wayne” is fun to look at—but it’s even more fun to actually visit the sculptures pictured in the book’s pages.

My son was visiting from NYC for Christmas and, as you well know, many of those who had left the city this year for the holiday had a challenge in returning at their appointed times. He was no exception so we had a few extra days together. Being with Mom and Dad for a week—when you’re 25 and single—doesn’t exactly make time fly so we set out one afternoon to do something besides watch television and eat.

Surprisingly enough, Chris, who has never really been “into history” but who loves art, got into the spirit as we drove around central taking photos of some of the statues depicting the people who are a part of ’s history. 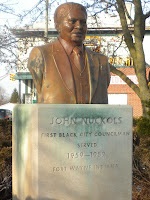 Our first stop was at the corner of Harmar and . The bust of John Nuckols is in , across the street from Carmichael Funeral Home. Nuckols was the first African American to serve on ’s City Council, which he did for 23 years, representing the first district.

According to the and Recreation web site, “ was purchased in 1876 from Fred Hayden for $4500 and was known as until 1986. The famous statue of General Anthony Wayne resided in until it was relocated to its current location in 1973. Now, the park features a memorial of its namesake, John Nuckols, the first African-American city councilman.”

From Nuckols we drove over to the Gas House to take a shot of the statue of Charles Louis Centlivre. 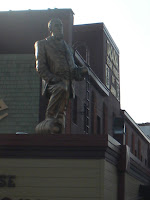 Centlivre was a Frenchman who moved to and established a brewery at the north end of Spy Run.

The statue was a tribute from his employees, who had the creation installed on top of the Old Crown Brewery after their employer’s retirement.

IAS files indicate the sculpture was blown off the roof of the brewery by high winds in March 1964 and moved by Hall’s Restaurants in 1974 to its current location on the corner of Spy Run and Superior Streets.

Exiting the Gas House parking lot, we drove under the railroad tracks into the parking area behind the . From there we connected to and took some photos of the Anthony Wayne statue in .

It was a really cold day so we did not park the car to take a close look at this sculpture. But on a warmer day it’s well worth your time to walk through the square and take a closer look. 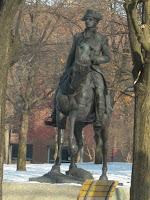 Anthony Wayne – “Mad Anthony” – is the name sake of our city and a character from history worth further exploration. You can see his camp bed and other artifacts from his time in at the .

From we drove over to and Crescent to see the statue of Henry Lawton. This is one of my favorite statues.

was a Civil War hero and the first native to win the Congressional Medal of Honor. The story of his life is truly interesting and the statue on the corner presides well over the neighborhood.

One of the many mysteries in Fort Wayne is why Lawton is in Lakeside Park, and not Lawton Park. 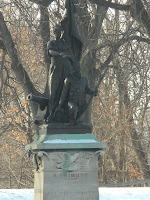 We then ventured to and parked long enough to take a photograph of the in on Spy Run.

and have a number of statues that you can view and a nice warm day is the best time to do this.

The Civil War Monument is the oldest public sculpture in .

is also home to a statue of Little Turtle and sculptures of the sisters, one of whom wrote “’s Mythology” that so many of us used as a text book in high school.

As we drove home, we went a little out of our way down to one of the buildings on across from the . The statue there of Abraham Lincoln was created by Paul Manship and completed in 1932. 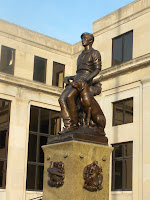 Manship was a world-renowned sculptor who chose to portray as a young man looking forward to fulfilling his dreams. Prior to his death in 1966, Manship produced a large number of coins and medals, including the JFK inaugural medal.

Heading out Washington we noted the statues of David Foster and Perry Randall where the street swoops around to become Jefferson. This is no place to slow down for a drive-by sighting but you can pull into Swinney Park to take a closer look at the statue of Foster. Foster is the founder of the Fort Wayne parks system. The inscription on his statue speaks to the importance of remembering and honoring those who shaped this city:

“He will live forever, not because of his military record, not by reason of his business career but by the laughter of the children, the strength of the youth, the joy of the middle-aged who shall live and love and prosper and know real happiness in the Greater Fort Wayne of Tomorrow, which is his dream come true.”

“Who Put That There” contains far more statues and sculptures than we featured here. But as you can see, you can map out a wonderful drive (or two) around our city to take a look at our history and perhaps spur yourself and your children to learn more about the people who made Fort Wayne what it is today.

You can also find more information about these and other historical figures at the Allen County Public Library, in books at the History Center, and on the internet. And watch this blog for more stories of Fort Wayne.