A great deal for those who love educational venues...like museums!

This blog post is an update of a previous release from the History Center.

Imagine, if you will, it’s late December, you have a house full of out of town relatives who are not leaving until after the New Year, the kids are already bored with their new toys, and the adults are beyond the point of restlessness. What better way to make the time fly than to visit three of Fort Wayne’s favorite, entertaining and educational venues!

The History Center, the Foellinger-Freimann Botanical Conservatory and Science Central have an affordable way to experience these three wonderful sites. Through the Museum Dream Pass program, for only $14 per adult and $10 per child (children ages 2 and under are free), one can have unlimited access to these three family-oriented museums for up to seven days.

The History Center is a partner in the national Time Travelers reciprocal program. Nearly 200 historical museums, historical sites and other venues share in the Time Travelers program, offering a range of benefits from free admission, to special discounts, to exclusive offerings. Current and future History Center members receive these benefits at no additional charge to their regular membership dues.

Contact the History Center at 260-426-2882 or see the Time Travelers link on our website’s home page at www.fwhistorycenter.com for more information.

Additionally, “triple members” are automatically given membership in the American Horticultural Society (www.ahs.org) and the Association of Science-Technology Centers, Inc. (www.astc.org). These two additional partnerships each boast about 200 participating organizations, meaning that “triple members” receive benefits to 600 organizations nationwide. The Indianapolis Children’s Museum, Minnetrista, the Field Museum, COSI, and the Chicago, Cleveland and Toledo Botanical Gardens are but a few of the organizations offering benefits to “triple members”.
Posted by Nancy McCammon-Hansen at 10:14 AM No comments:

Ahead of Her Time

Gene Stratton Porter was a Hoosier original. Born in the mid-1860s on a farm in Wabash County in Indiana, Geneva (Gene, as she would soon decide) was the last child for Mark and Mary Stratton. She had lots of freedom and roamed the fields and woods as she wanted. Her lifelong love of nature-flora and fauna
began there. Her father encouraged her interest in nature and taught her much about the land and its inhabitants. She did well in school work only if it was something she found interesting and even left school shortly before graduation.

Gene was an attractive young woman and caught the eye of an older business man when she was visiting friends. He was Charles Dorwin Porter. And the rest, as they say, is history.

In responding to his letter, Gene warned Porter that she was unlike other women. She said what she thought and pretty much did as she wanted. He was agreeable and after a brief courtship they were married and had a daughter, Jeanette. Charles prospered and Gene definitely said and did what pleased her. Writing.
Photography. Drawing. Mucking about in the swamps in northern Indiana. Collecting plants and birds. She became a world famous author and an avid advocate for conserving our natural resources. In her time she influenced politicians and presidents and provided reading joy to millions. She went to California to visit, but eventually went there to live. She died in an automobile crash in 1924.

Today we remember her in Indiana more, perhaps, because of the land she gave to the state than for her best sellers. (The Gene Stratton-Porter State Historic Site
near Rome City, Indiana and the Limberlost State Historic Site at Geneva,
Indiana). Reprints of her books are currently available as are some of her movies. Books that made her famous included Freckles, The Girl of the Limberlost, and Michael O Halloran.

AHEAD OF HER TIME is the title of the free Mather lecture and book signing to be presented by local author Barbara Olenyik Morrow on Sunday, November 6 at 2 pm at The History Center.

The book, NATURE’S STORY TELLER, is well-illustrated with photographs of Gene and the people and places in her life. The story told is indeed of a woman ahead of her time, worrying about land, habitat, climate, and
conservation long before it was fashionable.

Although this book is ostensibly written as part of a series of Indiana history books for youth, it is an excellent adult book as well. Gene Stratton-Porter emerges as a thoroughly believable and modern woman who was passionate about her cause. And we should all applaud her vision.

I thoroughly enjoyed reading again about the author I read greedily as a child. I think I will read again the lessons she taught about goodness and clean living and loving nature. Nature can be cruel, but her books provided lessons in a kinder and gentler way of living. Olenyik Morrow has captured the essence of Stratton-Porter in her narrative. 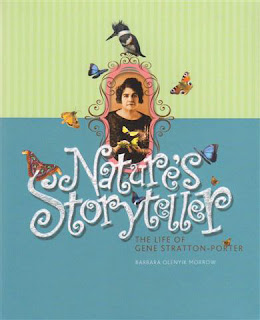 Posted by Nancy McCammon-Hansen at 9:53 AM No comments:

If you were unable to attend the Mather Lecture for October, reading THE STONECUTTER’S ARIA is perhaps the next best thing to being there. Carol Faenzi, of Indianapolis, presented the lecture and authored the book.

THE STONECUTTER’S ARIA covers a century in the tumultuous life of a real Italian family who immigrates to America to find a better life and eventually ends up in Indiana. Faenzi writes about her own family history and these are actual people’s lives we are reading about.

Just as though the book were an actual opera, each character tells their story as it relates to the time and place. The story begins during the late 19th century with the Giovannoni family in Carrara, the marble capital of the world and also home to an opera company. Music and marble have been in the family for generations, but hard times and promise of opportunity send the more adventurous to America. Such a one is Aristide Giovannoni who marries Ione and has children before he leaves for America and a new life. Ione and the surviving children follow and we get a steerage view of travel from Italy to America in the early twenties. The cities in the east are fine but too many Italian grocers compete and since Aristide and many other Italian immigrants are stonecutters they go where work is. Indiana.

The quarries of southern Indiana need for skilled workers create the influx of a sizeable Italian population in Indianapolis and other areas. The day to day life of the Giovannoni and Faenzi family become more complex and provides somewhat of a microcosm of life in the Great Depression. Oddly enough, the stonecutters prospered because the government and others erected many public buildings and Indiana limestone was a prime component. World War II presented some obstacles and the next generation went different ways.
Later, Faenzi herself will become one of the voices as she sought her heritage here and in Italy. Through her efforts, we can realize what drew these hardworking and talented people to Indiana and what they have added to our heritage. Researching for my reading, I discovered that Italians were also attracted to the mines in Southern Indiana. This made me understand why Clinton, Indiana in Vermillion County has an Italian Festival
Posted by Nancy McCammon-Hansen at 9:55 AM No comments: